You are here: Home1 / About

Jerusalem, We Are Here is an interactive documentary that digitally brings Palestinians back to the Jerusalem neighbourhoods from which they were expelled in 1948. Focusing primarily on the neighbourhood of Katamon, Palestinian participants and their descendants probed their families’ past and engaged with the painful present.

Together we produced short, poetic videos, filled with nostalgia, sorrow, and fleeting returns. The films are embedded into a virtual tour, where the audience – in Amman, Cairo, Jerusalem, Paris, Toronto and beyond – can “walk” down the streets of Katamon as these were filmed in 2012-2015. As we meander down the streets of contemporary Jerusalem, our soundscape is of the 1940s; and when we reach the home of each participant, we can watch the video/audio produced. As the generation of Palestinians who survived the Nakba (the 1948 catastrophe) is aging and passing on, there is an urgent need to collect their stories and knowledge, and remap the space that has been declared entirely Israeli.

When people flee war, they rarely take with them their photo albums or their documents or the art off the walls. Remapping Jerusalem, the map side of Jerusalem, We Are Here, is an online mapping platform in which each house that existed up to 1948 is a live link that can be populated with information. This organic mapping project is an ongoing collaboration with community members who contribute photos, documents and memories.

We began with Katamon and the Greek Colony and then added the German Colony, Baq’a and Talbiyeh as well. We will continue to organically and communally remap southern Jerusalem house by house.

How it all started

It all started with a hand-drawn map, neatly folded into the back of a memoir by Hala Sakakini.  The memoir was published in 1987 in Ramallah, but the map was drawn from memory in 1951 in Egypt.  The Sakakinis — like most other non-Jewish Jerusalemites – were expelled by Israeli forces from their Katamon home on April 30, 1948.

Map of Katamon by Hala Sakakini 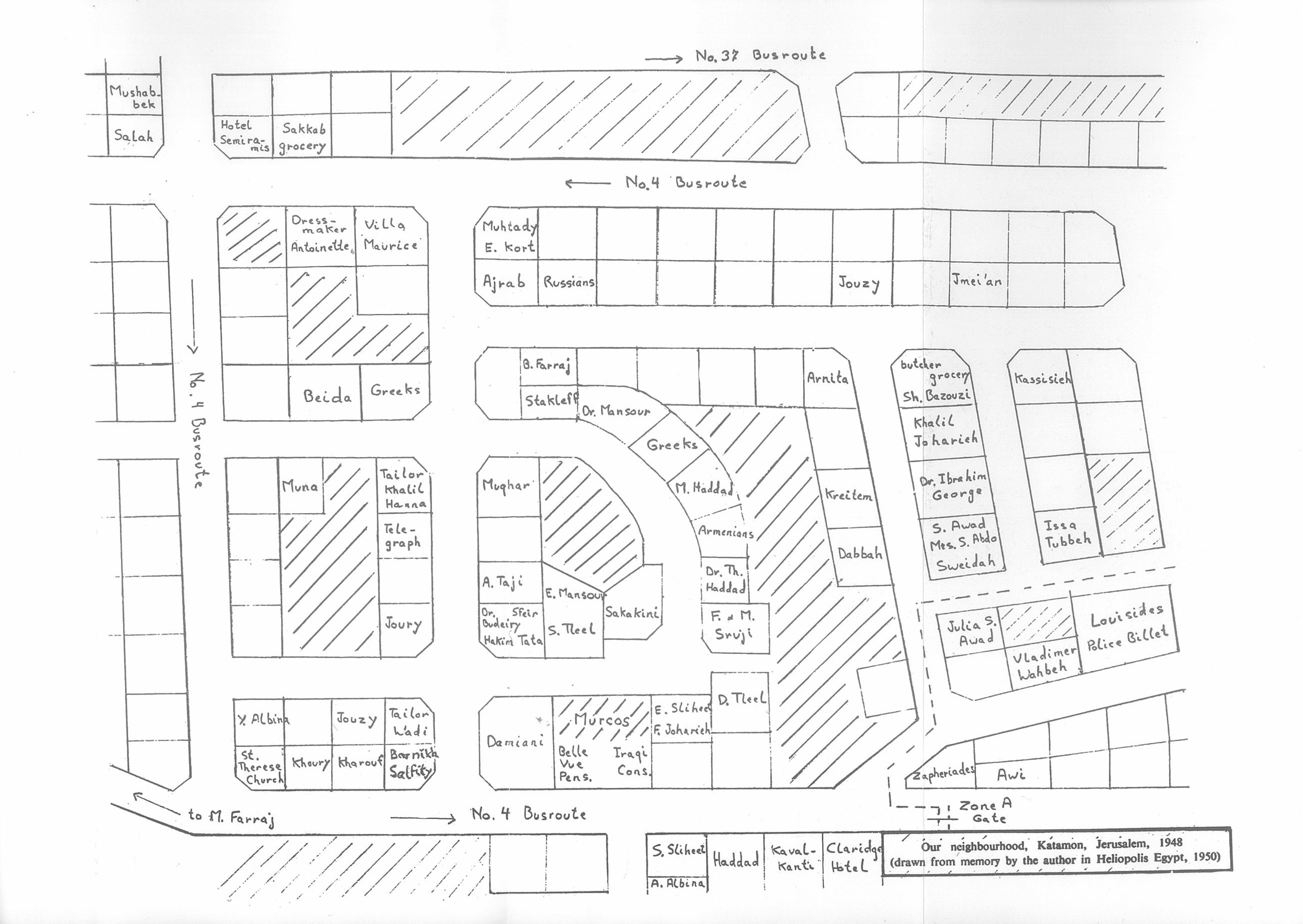 Like most Israelis all I knew was that the neighbourhood was Arab until 1948. In 2002 I read Ghada Karmi’s memoir In Search of Fatimah but I did not know where the Karmi house was or the Semiramis hotel or the Sakab grocery store. In 2007 I rented an apartment in the neighbourhood for a six-month sabbatical. I had no way of mapping Ghada’s Katamon to the neighbourhood I was walking in until I found Hala’s memoir and map.

The map covers the immediate neighbourhood of Katamon, listing the residents most of whom Hala knew by name. With map in hand, and a few more memoirs read, my vision of the neighbourhood shifted. I would imagine recent building additions and temporary structures removed and I could name the people whose gardens and houses I was walking by.

Katamon was populated in my mind with the architects, educators, doctors and intellectuals who shared the public and private spaces. The map gave me an idea: to find the residents and their descendants and collaboratively make short films about their home. I imagined projecting films on houses, a walking app and tours, and thus began a long journey resulting in the interactive documentary Jerusalem, We Are Here.