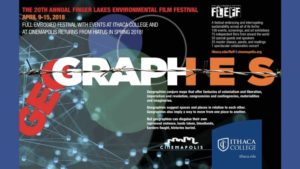 “FLEFF presents an exploration into the geographies of new media this year with an extraordinary project called JERUSALEM WE ARE HERE by Dorit Naaman.

This interactive documentary bring expelled Palestinians, Greeks, Armenians, and others back to their former neighborhoods.

Dorit Naaman is a documentarist and film theorist born and raised in Jerusalem. She teaches film and media at Queen’s University in Ontario (Canada) and splits her time between Canada and Jerusalem.

Naaman developed a format of short personal documentaries, which she calls DiaDocuMEntaRy. She has published on Israeli and to a lesser extent Palestinian cinema, focusing on gender, nationalism and militarism.

She initiated Jerusalem, We Are Here as a collaborative platform that can map and tell the stories of a Jerusalem that is no longer visible”

Event Report:
A fantastic presentation and discussion in Ithaca at the Finger Lakes Environmental Film Festival. Thanks to Patricia R Zimmermann for the opportunity to share our work in such a brilliantly conceived and executed festival.